What would this world be like without music? I cannot imagine. I grew up with a passion for music. My earliest memory of it is when I was approximately 2 years old, hands held high for my mother to pick me up, but she wasn’t able to because she was hand- washing dishes. She looked down at me and said, “Not yet, wait one moment honey.” She began humming and singing a soothing song as she cleaned. I recall slowly putting my arms to my side and listening to her while feeling peace in my heart.
During my early childhood, my two oldest siblings took piano lessons. They would come home and play the songs that they learned. I would ask them to play the songs, laugh contentedly, and then ask them to play the songs over and over again. Eventually, they became annoyed or exhausted and stopped. There came a time when I asked them to play a song again (for the one hundredth time I’m sure), and they declined, walking away from the piano. Instead of being upset, I remember being curious and determined. I desired to hear the song, and could almost feel it within me. I timidly walked over to the piano, hummed the tune loudly to myself, and began playing notes. I played the song! This was how I started playing by ear. I felt overjoyed because I now had the opportunity to play the song as much as I wanted to. I used this same technique to play some of my favorite radio tunes as well.

The piano was my first instrument, and soon my voice became my second one. I grew up listening to artists such as Whitney Houston, Patti LaBelle and Mariah Carey. I sang often (at home) and performed mini talent shows for my family members. I freestyled, made mix tapes, and created my own songs, too.

My teenage years were the most challenging times for me. I was socially awkward and self-conscious. I became extremely introverted, almost reclusive. I mostly listened to Rap, R&B, and alternative music. When I felt upset, I locked myself in my room and sang and cried until my heart seemed to burst with relief. I also played saxophone and percussion in the marching band, and continued playing piano by ear. Some days, I remember sitting at the piano for several hours, getting lost in the melodies and harmonies, becoming one with the myriad of vibrational tones. Music helped me to express myself, to cope with challenges, and essentially to heal. 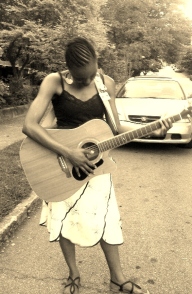 Currently teaching myself to play guitar 🙂

In regards to healing—-right now I work as a licensed psychotherapist in a facility. I am integrative in my approach, meaning that I incorporate various techniques to support my clients’ wellness. I believe in holistic health, so I address the mental, physical, and spiritual aspects of recovery. I have worked with clients with ‘severe’ mental health issues such as Schizophrenia. I have found that music can bring forth miraculous results. One day, I led a group on coping skills and chose to incorporate music into the material. During this group I witnessed an almost non-responsive schizophrenic client go from being completely detached to being very lively, smiling, laughing, and even dancing with the other group members. All I did was play a song that he recognized.

It never ceases to amaze me to see how my “severely mentally ill” clients respond to music. Most of them smile, their eyes light up, and many of them begin having lucid conversations with me. It is as if they are brought back to the present moment, revived from the abyss of their psychoses. Other therapists have expressed similar experiences. Many are using music to revive those who suffer from the symptoms of dementia, Alzheimer’s, and even Autism. Researchers have found that musical memory is stored in a different area of the brain than other types of memories; it is believed to be tied to emotion, thus making it easier to access.

Music is ageless. I listen to artists such as Donny Hathaway, The Beatles, Bob Marley, and Earth, Wind, & Fire. These artists are from generations before mine, yet their music will continue to live on.
Music is amazing. As a healing force, it can be used to tone chakras, aid in meditations, and call in the angels. Not only is it a healer, but it is also Universal. Think about this: There are thousands of concerts held worldwide where people from different nations attend in order to experience the music–even if they do not speak the same language.

Music is a Universal Language. Dare I say, it is inter-universal. Music touches the vibrational frequencies of peace, love, and harmony. It is a Divine Language that the hearing impaired, “mentally ill”, and young children alike can all understand.

Let’s add more positive music to this world and see how easily we remove the barriers that create wars.

What does music mean to you?

Check out this story: http://www.youtube.com/watch?v=QX-xToQI34I

One thought on “Music: The Universal Healer”