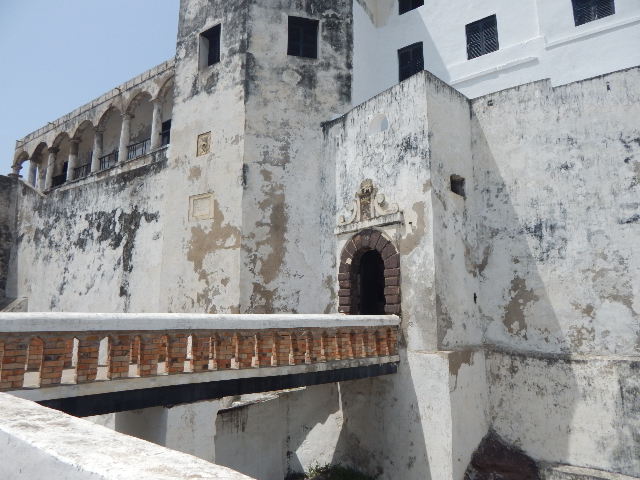 I am currently in Ghana, in the western part of Africa, on my first trip to the continent. I arrived in the city of Accra late on a Tuesday night in March. I was nervous, excited, and exhausted all in one. The customs line for foreigners was very long, so it took over an hour for me to get through. When I made it outside the airport, the first thing that I felt was extreme heat and humidity. I had been on the freezing cold airplane for several hours, the airports were very cold, and then suddenly it was hot. The second thing I noticed was all the Black people…Africans. They looked so beautiful, glowing, and so dark that their skin mixed with the night sky. It was lovely.

My first week here was spent doing tourist-like activities. I have been exploring the region and getting a better understanding of the people. During this tour, I visited Cape Coast Castle and the El Mina Castle. Some ex-pats refer to these locations as the Dungeons instead of castles. These are places where Africans were held in captivity before boarding ships to be sent to other parts of the world as slaves.

Needless to say, going on a tour of the castles was an emotional experience for me. Maybe not in the way that you would think, though. Instead of tears of sadness and sorrow, I became very angry when I heard about the inhumane things that were done to my ancestors. Although I learned about slavery, I was only given a small perspective—one from the lens of American History. The more I learned, the angrier I became. It was disturbing to think about the level of maltreatment that one human can inflict upon another and continue to live a fairly normal day-to-day life.

I heard about the ways that Africans assisted the Europeans to capture other Africans, especially if they were from another tribe or were offered a large amount of European goods.

I learned how the female slaves in the castle were abused and sexually exploited by the governor and his men. The women were forced out of their dungeon and had to walk in a small open courtyard. The governor’s quarters overlooked the courtyard. He simply would point at the woman he wanted to have sex with, and then she was taken through a secret door to his bedroom. Once he was done, she was put back in the dungeon with the others. If she refused, she was left outside, a ball and chain around her ankles to suffer…as punishment.

In the courtyard: Ball (without chain) for female slaves who refused sex

There is a great amount that I would like to write about this experience, yet I will keep this post brief. (Maybe this will turn into a book.) One other thing that I will mention is the “Door of No Return”. The slaves were kept in the dungeons for weeks and months at a time (men and women were separate).
Think about it: Hundreds of people in one room–eating, sleeping, defecating, urinating, sick, etc…in ONE small room. The ones who died were taken out and tossed into the sea. The ones who survived made the life-altering journey onto the ships that transported them all over the world…. when they walked through the Door of No Return. Not only did they have to endure the dungeons, but the ones who survived had to endure the ship rides around the globe. What a shame that so many people suffered from this tragedy at the hands of their own people.

This is only a miniscule piece of the history of this planet.

Door of No Return

Why am I writing any of this? Because I desire for you to open your eyes and your mind.

I refuse to believe that human nature is naturally selfish, greedy, and immoral.

Yet, I do wonder: What will it take for all humans to see each other as fellow brothers and sisters on this planet? How can we mend the mistakes of those before us and live in a peaceful world instead of repeating this revolving pattern?

Several RIP flowers and gifts were left in the dungeons from visitors around the globe.

In spite of the anger I felt, I found one thing to be slightly comforting. Several people from all over the world left gifts, flowers, and memorials for the slaves who were in the dungeon. Most of them read, “Rest In Peace” and referred to humanity learning a vital lesson from the pains of the slave trade.

I know that healing is possible. But first, we must have compassion for ourselves and each other.

We all need each other now more than ever.