I mentioned in Part 1 that earlier this year, I traveled to Ghana, West Africa and stayed for a month. In my time there, I learned a lot of positives about myself and the Ghanaian culture. I also recognized some of my own stigmas, and challenged others’. However, there are some things that I learned which opened my eyes to the reality of the challenges we face due to our ego-centric human nature and history. Through my next set of posts, I will address some “ugly truths” that I developed a better understanding of while being in Ghana.

As I shared in the first post, there were several people from other countries visiting Ghana. Due to my naivety, I thought that the majority of these people were tourists or volunteers. When I spent more time in the country, I paid attention to the landscape, noticed the architecture, and witnessed the different “classes” of people.

There were notably many people from China, India, and France in Ghana. (Through conversation, I learned that there are many people from these countries who reside or visit Africa in general.) I have seen videos of other African countries with “foreigners”, but the experience is different when something is observed firsthand.

I saw extravagant hotels, numerous casinos, and fancy apartment buildings in Ghana. When I asked the locals who owned them, I was surprised to know that most were owned by “foreigners”. These luxurious establishments were in the middle of cities with shack houses, cramped market spaces, and unstable roads. In the least, they were hard to miss because they appeared to have higher quality construction.

Why, you may ask are all these businesses there? Well, think about this: Which nation/continent is one of the largest leaders in cocoa production, has lots of oil, precious metals, diamonds and gold? You got that right. Africa.

I was bothered to not only to witness the economic disparity among the native Ghanaians, but also to observe the ways that the people were being taken advantage of by “foreign” businesses (example: Paying workers far less to run million-dollar businesses). I talked with many educated local businessmen who expressed that other countries are investing heavily in the continent of Africa and its countries. I learned that treaties were formed centuries ago that have left the people with little to no input or income when it relates to the extraction, use, and distribution of their resources.

It is funny to me that a great amount of the American publicity about the continent has been geared towards driving people away from Africa, or displays the people as poor and impoverished. Yet, I clearly saw that other countries see Africa as a rich continent filled with resources and wealthy opportunities.

I am not against people thriving and doing well in their business and economic endeavors, but I do not vibe with groups who take advantage of and oppress another group for their own gain.
It is once again, another form of slavery. The Ghanaian people are very kind, open, and non-violent. Their hospitality is nothing like any Southern hospitality I have experience in the United States. But, something is missing. They are rich and do not know it.

However, a crafty way that I can explain learned helplessness is like this:
A person desires to get help with turning off a light in a room. The person is facing a wall, and the light switch is on the opposite wall that the person is not looking at. Due to the person’s history and past experiences, the person was made to believe that he/she cannot help him/herself. So, this person asks every other person who comes into the room for help with turning off the light. In reality, all that the person has to do is turn around and flip the switch.

When I roamed around Ghana, a lot of the people expressed that they want to come to the US in order to find jobs and make money. Almost none of them said that they wanted to have their own businesses and thrive in their own country. I couldn’t understand it. I felt like they were in a land overflowing with wealth, yet they were seeing it only from a limited viewpoint, and a very negatively skewed one at that.

It appears that their view of their situation is a result of a centuries old “(human) race consciousness” that supports limited awareness of personal strength and freedom.
I desire for the Ghanaian people to know how rich they truly are. Food grows almost everywhere, the air is lively and basically unpolluted (most places I went), and the land has a wealth of resources. 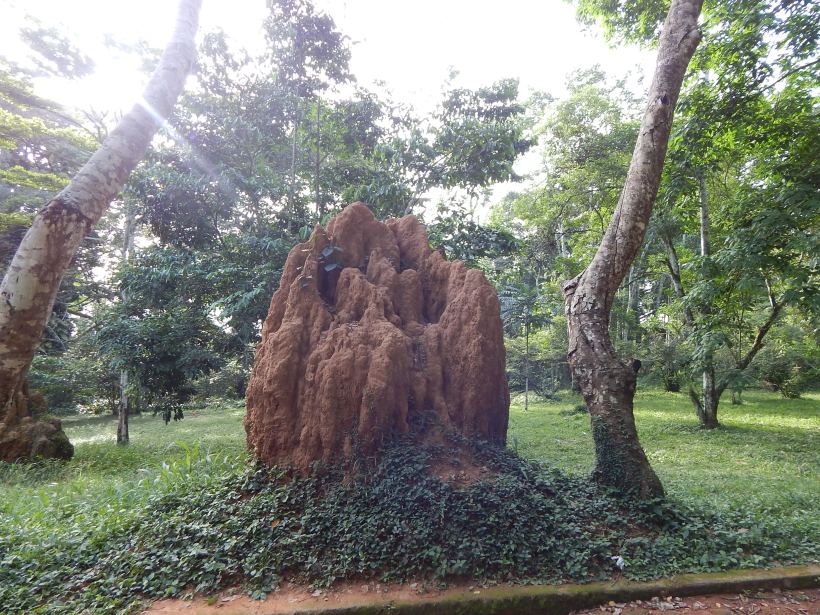 These ants did not question if they could build this structure. They knew they had the ability, worked together, and did so, unencumbered.

To my Ghanaian brothers and sisters (and you the reader):

Do not look outside of yourself in order to discover riches.
See who You Are.
You Are already Rich and well-equipped.
Tap into your innate strength and wealth.

2 thoughts on “Adventures in Africa Part 4: The People Are Rich, but Do Not Know It”