Spring 2017 is in the air, and here we are, the United States of America, with our new 45th President, Donald Trump. In these first few months of his presidency, President Trump has equally inspired and enraged many American Citizens and people across the globe with his actions.

Many people continue to express extreme fear and worry about the future of the United States of America, due to the current political climate.  Several people have been reactive, uproars of events have taken place, protests were organized, and even rioting occurred. America appears to be dividing further into opposite ends of the poles. Xenophobia appears to be on the rise, and equally so, more diverse groups of people have shown solidarity. I watched in sheer curiosity as people divided themselves through bigotry, racism, religion, political beliefs, etc.

When a person allows a concept to become more powerful than his or her sense of Self, then there is a problem. I am not only referring to politics, but also to labels that people give themselves, which then have become some of the same labels that people have allowed to disempower themselves.

I have spent many months away from blogging to really go within and to stay clear and aligned with what I am here to do. Hear me clearly though; I am aware of the things that are going on with this nation, but I have not lost sight of the Truth.

I am at the space in the middle of what appears to be a divide.

Several months ago, I knew that Trump would be elected for president AND win. When it happened, I wasn’t startled or upset, or even moved by it at all. This is the beauty of seeing the Spirit of things. I have no investment for or against him or any other person who has been our President. My investment is in elevating our consciousness as human beings and laying the foundation for a harmonious world.

“In all chaos, there is a cosmos, in all disorder a secret order.” -Carl Jung, Swiss Psychiatrist.

So, just for a moment, take a step back from any biased viewpoint you may have and open your mind to this information. Let’s be objective and see things as they are…Metaphysically.

On the larger scale, President Donald Trump is doing exactly what he is meant to do in the exact way he is supposed to. Trump carries strong trailblazing energy and is the perfect vessel to push against the grain, causing many people to pay attention (whether they are for, opposed, or even indifferent). He is a catalyst. If we get honest with ourselves, we can see that ALL our other presidents were catalysts as well.

The people who we collectively put in leadership (consciously or subconsciously) are reflections of where we are and what we are transforming about our nation.

What we are experiencing is the next step in our human evolution and our spiritual awakening.

In Common Sense in 1776 Thomas Paine said, “We have it in our power to begin the world over again.” We do.

A farmer must till the soil before planting the seed. The very much alive seed remains in darkness until the right conditions are present for it to break through the soil. This situation is no different.

If you find yourself becoming upset or reactive to things happening with our political system, look within first. Something in you is getting your attention, inviting you to own the deeper power within.

Let’s get even more real…

Last time I checked, no one has any power over us but ourselves. Everything we have engaged in is because we have chosen to do so. It’s not a bad thing. Laws, rules, and regulations are in place because they have been helpful over the years. We, as humans, have agreed to these imaginary rules and what their consequences are. We, as humans, can change them…starting with our consciousness about them.

It is a beautiful thing when people join together to connect at the heart level and express themselves from this space. When people are at this level, no external example has to be constructed or forced. It is an organic process. (Just like that “something” in you that led you to keep reading this.)

Please understand: I am not against marches, protests, or demonstrations, etc. I am for unity through empowerment of each other and ourselves. Empowerment, for some, includes physical demonstration made public. For others, it is a very private, daily practice. For all, it requires the constant cycle of awareness, intention, and conscious action.

There must be a point where we begin to face the facts:

(Refer back to Fact Number 1).

I wrote this to encourage you not to get swept away in the sensationalism that gets blasted in the media frequently. Sensationalism breeds cloudy thinking and impulsive reactions. Whether you are Muslim, Christian, Buddhist, Jew, New Thought, Native, Black, White, Brown, Transgender, immigrant, refugee, Conservative, Liberal, or whatever else you identify with…

No matter where you are or what country you are in, we all live on one big mass that we call Earth, located in this expansiveness we call space. We need each other. That’s it. 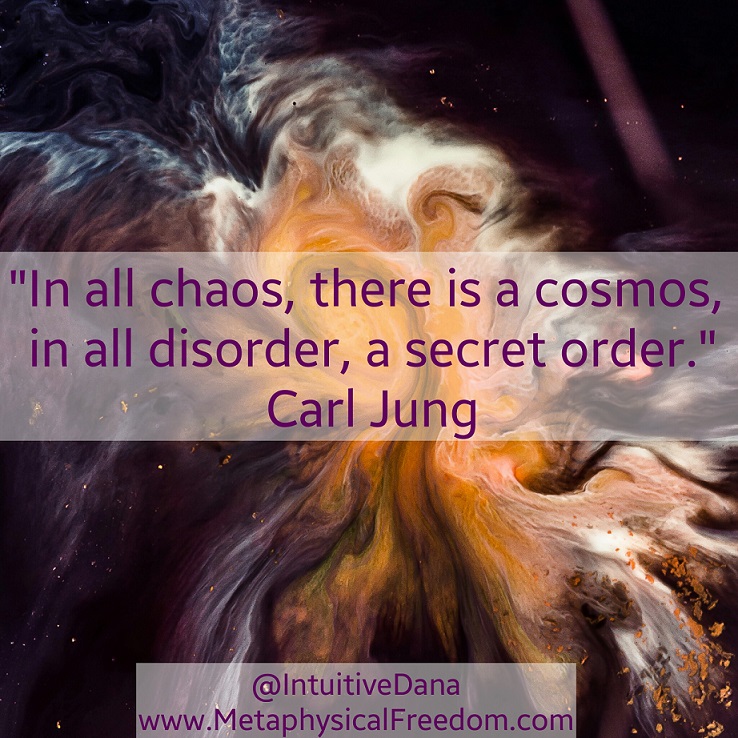 “In all chaos, there is a cosmos, in all disorder a secret order.”

A cosmos is a harmonious and orderly system, and it is up to us to create it.