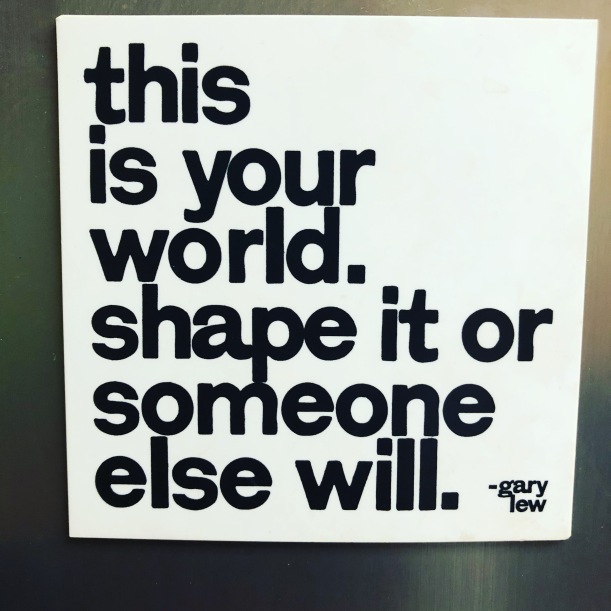 “This is your world. Shape it or someone else will.” -Gary Lew

This is one of the reasons why I do what I do.

We live in a world where there are several, easily accessible distractions from Self and the transformative power within.

I took a hiatus from blogging and public speaking to detach and recharge from all the energetic “stuff” that has been happening, to re-mind myself of what is true for me, and to stay grounded in this knowledge by seeing through the distractions.

We can become so accustomed to looking at social media, websites, and the news that these things easily become subconscious influencers.

The next time you scroll or flip the channel, think about what you really believe, what you really desire for yourself (and the world), and if the things you are entertaining and doing match those desires. If not, put down the phone (tablet, remote, etc.), wake up from the distractions, and do something different.

Encouraging you to Wake up.

Recently I posted for the “Man Crush Monday” (#MCM) social media trend for the first time ever when I was visiting Miami Beach, Florida with family.

We left the beach and walked to a nearby restaurant. A very attractive host greeted us with a dazzling smile and sparkly eyes. He was approximately 5’10” with a fit physique and perfectly sprinkled salt and pepper hair. I noticed his universal attractiveness. (Many people smiled or gasped at his appearance.) Something else that made him attractive was his kindness, patience, and that he legitimately provided great customer service. (During our trip, we discovered that not every place provided the best service, so this was a plus.)

After brief thought, I decided to post about him using the MCM tag, not only because his looks were breathtaking, but also to promote the restaurant, which served good food too.

As I mentioned, I don’t normally post for the “Man Crush Monday” or participate it in, but I decided to do something different. I posted a few pictures with him on my Instagram account and a few of the restaurant.

The first response I got was condescending. I won’t repeat the words in this post, but I will say that it was clear why the person wrote the message.

You see, the handsome gentleman at the restaurant had green eyes, short straight hair, and he was not Black. He was Cuban.

I wasn’t going to write publicly about this, but I do realize that I need to “Go There” and talk about “Race” again on this Metaphysical blog site.

I am a Black female whose ancestors were slaves (and some slave owners to be real about it). I was born and raised in the South where I have been discriminated against, called names, and prejudged because of my skin color. I am a proud descendant of slaves, knowing that I am alive today because of their mental, physical, emotional, and spiritual strength.

My parents were strong enough to survive segregation and the pains of going through the Civil Rights Movement. This wonderful DNA is in me now. Their evolutionary spirits are in me now. I am proud of who I am.

With this being said, I have always been attracted to men, whether they are the same skin color or not.

When I was in elementary school, I had a crush on a classmate named Owen. He had blonde hair and hazel-green eyes. Unfortunately, I was not blind to our differences, so I asked a female adult “mentor” how she would feel if I liked a White guy. Imagine a six or seven-year-old asking you this question. The “mentor” said, “I prefer you stick with your own kind.” As a very young child, I felt disappointed with her advice and felt like she was telling me that my feelings were wrong in some way. I also wondered, “Why did she say, ‘kind’? Aren’t we both human?”

Despite my disappointment, I continued playing with Owen on the playground and cherished my time with him. He was fun and affectionate. (As affectionate as you can be on a rated G level). Neither of us said anything about liking each other, but we always found each other and played together until the time was up.

One day, I was given the opportunity to transfer to a new school and my teachers and classmates knew I would be leaving soon. Owen and I kept on doing our “play dates”.

I felt happy and sad at the same time. Happy to know he liked me back. Sad to see him get pushed around and picked on for liking me. I transferred to my new school and never told him how I really felt.

I learned my lesson though. When high school rolled around, I didn’t hold back. My “high school sweetheart” was a 6’3”, blonde haired, and blue-eyed football player. It was during the relationship with him that I learned not to focus on what other people thought about me. Black and White people alike called us names, stared at us nastily, and had underhanded things to say about us being together.

I’m not blind to our history and the painful things that continue to happen in our world today. I am not blind to the stereotypes about Black people and how we are wrongfully portrayed in the media. But, to try forcing myself or anyone else to be blind to LOVE just because a person is a different skin color or culture is completely inhumane to me.

I love who I love. He can be as dark as the night sky with a smile like the moon and eyes like stars. He can have hair as light as sand and eyes as blue as the midday sky. I love who I love, and I have the freedom to do so.

We, as humans are beautiful. We are culturally diverse and flavorful. Ultimately, we are made of dust. No matter our skin color or our culture, when our physical bodies die, they all return to the Earth.

This is the SAME Earth we share right now, while we are living.

Approximately 5 days prior to my return from my journey in Ghana, many people started messaging me frequently. Most of the messages said one of two things: “When are you coming home?” or “You’ll be coming home soon!” I kept on receiving those messages almost daily. I felt conflicted when I read them. By this point, I had gotten accustomed to being away from the US, and was excitedly exploring areas of Ghana on my own.

In the beginning of the trip, I was anxiously trying to make sure that I had access to wifi. I have this app on my phone (that I will keep anonymous for now) that allows me to communicate with anyone across the globe who also has the app. The more that I let go of my fears about being overseas, the less that I looked at my phone to see if there was a wifi connection. So, by the time I had reached the closing of my trip, I really did not overwhelm myself with using the app, unless I was talking with the locals and a few friends.
Plus, part of the conflict I was experiencing was because I kept thinking and wanting to reply, “I AM home.”

I loved walking freely down the streets with the locals, smiling, wearing my summer dresses, eating fried or fire-baked plantains, slurping down the sweet chunks of local pineapple, and having heartfelt discussions with fellow young adults about ways we can unify our world.

I was definitely Home.

Yet the time came for me to leave. I was very upset, but checked in with my heart and got clear: “All is in Divine Order and there is a reason for my return at this time”.

I got on the plane heading back to the US. It was going to be at least an 11-hour flight into JFK airport, and then another 3 hours or so back to Atlanta. I wanted to stay awake for most of the trip, so I decided to watch movies while I was on the plane. There were several choices, but I was drawn to two particular films. I watched Selma and 12 Years A Slave during my flight back to the United States of America…coming from Ghana, West Africa.

Needless to say, I am not sure what drew me to those films (and I knew what they were about), but watching them during the flight had more of an impact than I had imagined. I cried, felt disgusted, and was reminded of another fact about the foundational history of the place I was heading to.

So many thoughts and emotions rolled through me. My parents, who are in their late 60’s and early 70’s now, were once forced to use public amenities that were for “Coloreds/Blacks Only”. They went to schools that were segregated. They saw the life of Martin Luther King, Jr. in real time. My dad marched in demonstrations, and I recalled marching with him and local members of the community as a very young girl in order to commemorate Martin Luther King, Jr’s activism when he visited my home town. (Where he was arrested, by the way.)

Then I landed on US soil. I made it back into Atlanta, Georgia, and attempted to re-assimilate myself into American culture by catching up on the latest news. The first thing that I heard about was another shooting of an African American male. I turned off the news and sat in silence for a few hours. I felt numb and heavily detached, because I knew (and know) that this does not have to be.

Not long after that, the shootings in Charleston occurred. Once again, I thought about my experience in Ghana, and then recalled what I was witnessing here in America. It was challenging to go from an environment that oozes with freedom into a place that began to feel oppressive and constrictive. But I always remember that I have choice, and I can choose my own thoughts.

From our thoughts, our feelings and behaviors are affected. We can choose to interact with our environment from an intentional and positive mindset.

Yet, I still chose to reflect upon the history of America…briefly.

Many Americans know that this country was built from the desires of ego-centered men who seemed to have lacked understanding of the True Essence of humanity as a whole. Here it is, the 4th of July, where many of us Americans celebrate Independence Day. Yet, what is really being celebrated? The signing of the Declaration of Independence is not completely about freedom. (I also learned that some colonists did not sign it until an anti-slavery clause was taken out of it, but that may be for another blog post.)
Essentially, the 4th of July is celebrated because the colonies chose to declare their independence from Britain. The colonists were upset with Britain because they were being taxed, feeling stressed, and various rules were placed upon them that they did not like. But think about it…aren’t these same types of taxations and rules in existence in the country right now?

So I ask you, “What are you celebrating?”

I love this line in Bob Marley’s Redemption Song:

“Emancipate yourself from mental slavery. None but ourselves can free our mind.”

I encourage you to recognize the power of your mind and the unshakable freedom that you have from owning your own thoughts and creating your experience from your authentic mind. Not from what someone else has told you, and NOT based on history. History does NOT have to repeat itself, and would not be able to if we renewed our minds and evolved.

You and I KNOW that there is a better way for ALL of us to live on this planet, and that is in HARMONY with it and each other.